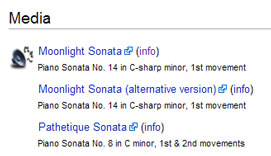 Some Wikipedia articles include sound or video files, which can be played on almost all personal computers. However, your computer must have the right software. If your computer does not automatically play these files when you click on them, downloading and installing free software from the internet can enable it to do so.

Music files may occasionally use the MIDI format (.MID or .MIDI extension). MIDI is generally playable without additional software, as most computers have a MIDI-enabled player and sound card.

For help making and converting video and audio into the format usable on Wikipedia, see Wikipedia:Creation and usage of media files.